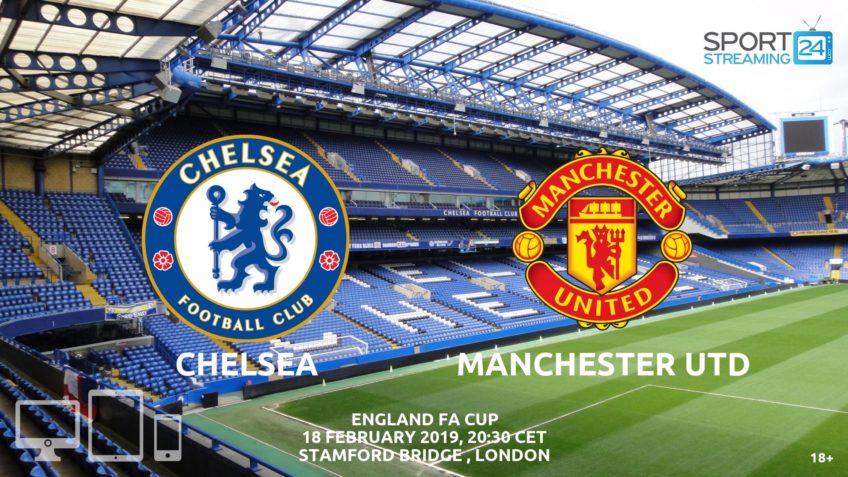 bet365 are showing Chelsea vs Manchester United live streaming for FA Cup on February 18, 2019, through their live streaming service (available for mobile devices such as iPhone, iPad, Android).

BLUES LATEST NEWS
Chelsea has been a Jekyll and Hyde team in 2019, flipping between wins and losses. Maurizio Sarri‘s reign suffered a major setback a week ago with a heavy 6-0 defeat to Manchester City, but the Blues got back to winning ways on Thursday, beating Malmö in the Europa League 2-1.

Luckily for Sarri, he gets another big game in front of the home crowd this time. Leicester City has been the only visiting side to walk away victorious from Stamford Bridge this season. With all key players healthy, Sarri will be hopeful of keeping the good record.

UNITED LATEST NEWS
It took 12 games for Ole Gunnar Solskjaer to finally suffer a loss as United boss. The Red Devils were no match for PSG on Wednesday and the Norwegian needs a reaction from his team here.

United have already beaten Arsenal in the cup this season and Solskjaer also led the team to victory at Wembley against Tottenham, so meeting another top-six rival shouldn’t be intimidating for them.

Missing Jesse Lingard and Anthony Martial, who both came off injured against PSG, will be a blow, but Solskjaer has plenty of attacking options to choose from, and the likes of Alexis Sanchez will relish the chance to impress.

MATCHUP TO WATCH
Jorginho is playing a key role in Sarri‘s system and opposing teams have figured it out.

Nemanja Matic gets the assignment of shadowing Jorginho every step of the way, and United will be nicely set up for success if the Serbian does a good job.