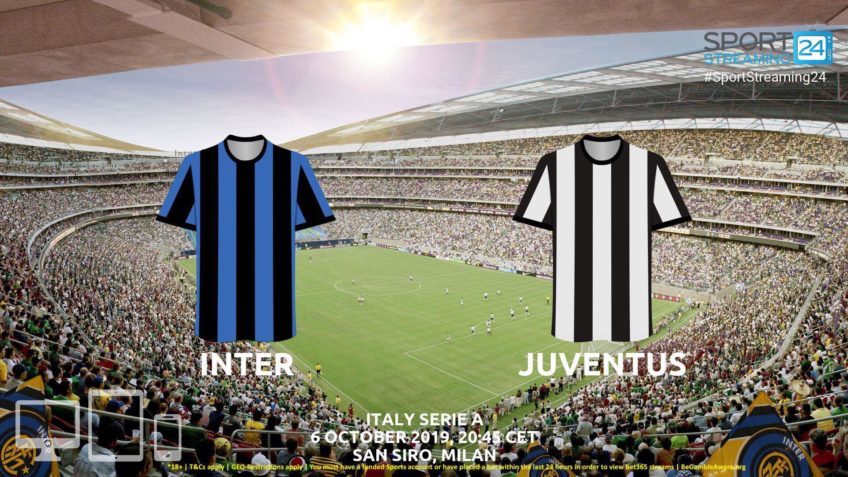 bet365 are showing Inter v Juventus live streaming for Serie A  on October 6, 2019, through their live streaming service (available for mobile devices such as iPhone, iPad, Android)

How to Watch Inter v Juventus Live Stream at bet365

INTER LATEST NEWS
The Nerazzurri are coming a 2-1 away defeat from Barcelona in the Champions League group stage.

In the league, Antonio Conte’s side beat 3-1 Sampdoria to claim the 7th win in consecutive matches in the campaign

Under 2.5 goals were scored in the 8 out of 10 recent home games in the Serie A. Lost only once in the last 11 fixtures with 7 wins and three draws.

Attacker Alexis Sanchez is missing from the squad due to suspension. Striker Lukaku is available again after being rested in midweek’s clash in Spain.

JUVENTUS LATEST NEWS
The Bianconeri had an easy task against Bayer Leverkusen in the Champions League with a 3-0 home victory.

In the Serie A is coming from a 2-0 win in Turin against SPAL to remain two points behind rivals Inter in the race for the title.

Unbeaten in the last 5 derbies with the Milan club in the league with 3 wins and 2 draws.

Defenders Chiellini, Danilo and De Sciglio plus winger Douglas Costa are not available through injury problems.

How to Watch Inter v Juventus Live Stream at bet365

Romelu Lukaku has found his confidence after his transfer to Italy. The Belgium striker has scored 3 goals in six appearances this season and has proved vital already to his manager plans.

Cristiano Ronaldo is the main man to watch as he always attracts the headlines, leading the attacking efforts for the Old Lady. The Portuguese striker has netted 3 goals in five league matches this season and is the player for the big matches.