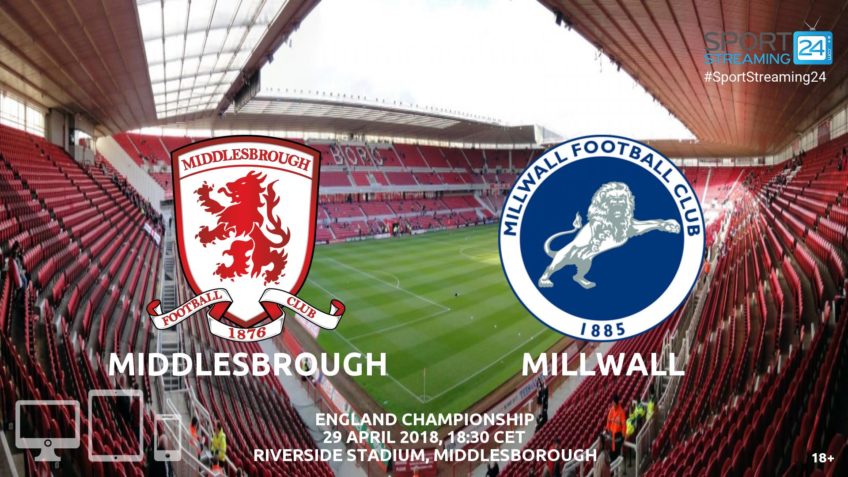 bet365 are showing Middlesbrough v Millwall live streaming for Championship on April 28, 2018, through their live streaming service (available for mobile devices such as iPhone, iPad, Android)

Middlesbrough and Millwall will continue their push for the Championship playoffs with a head to head meeting. The Lions will be looking to bounce back from a heavy defeat suffered last Friday against Fulham.

BORO LATEST NEWS
Middlesbrough won their last match against Derby 2-1 and they now have three wins in the last four games, which has catapulted them to the fifth place in the league.

Tony Pulis‘ team will be aiming to avoid defeat here, as Millwall is exactly three points behind them, so a loss would make things difficult ahead of the final match of the season.

Six wins from last seven home games will make Boro confident that they can get another three points on the board here.

MILLWALL LATEST NEWS
Millwall suffered only their second defeat in 2018 against Fulham, as a 3-0 hammering ended a 17-match unbeaten run in the league.

Neil Harris‘ team haven’t lost back-to-back league games since November, so they should also feel pretty good about themselves ahead of the trip to the Riverside Stadium. Millwall has greatly improved on the road during the latter half of the season, winning seven of the last nine matches.

They actually didn’t have a single away win before the run started on January 20, so it’s been an amazing turnaround. However, it wouldn’t mean anything if they can’t get a result here, as it would pretty much nullify their hopes of reaching the playoffs.

H2H – LATEST STATS
Boro will be gunning for revenge here after losing the first meeting of the season at The Den 2-1.

It was their first loss to Millwall since 2014. They have a great scoring record in the head to head meetings, having netted at least once in 10 straight matches.

Although, Millwall have also been productive in the matches, which has led to both teams scoring in eight of the last 10 meetings.

There generally aren’t many goals in Millwall matches, as eight of the last 10 have ended with under 2.5 goals, but the chances seem high that the trend won’t continue here.

MATCHUP TO WATCH
Adama Traore hasn’t scored a goal for over a month, but he has assisted all of Boro’s last four goals. Millwall left-back James Meredith has to be sharp against the former Spanish youth international.