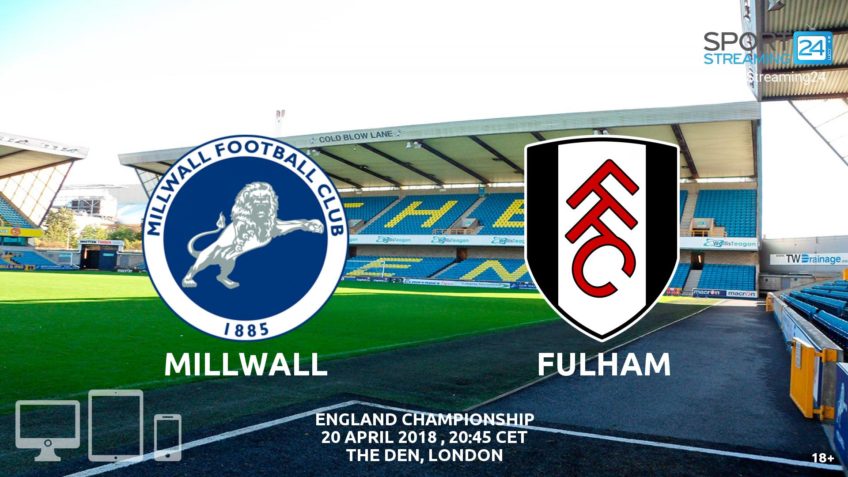 bet365 are showing Millwall v Fulham live streaming for Championship on April 20, 2018, through their live streaming service (available for mobile devices such as iPhone, iPad, Android)

We are upon a great London derby between Millwall and Fulham, and this game might decide a lot of things when it comes to final standings of the SkyBet Championship.

MILLWALL LATEST NEWS
Millwall is chasing a place which leads to the playoffs, and at the moment, boys from the Den, are occupying spot No.6 with a tendency to go even higher. They haven’t lost a single event for 13 matches in a row, and the confidence is very high among Neil Haris‘ troops.

The Lions are one hard working, defensive minded assembly, which relies mostly on protecting their own goal, and waiting a chance to perform fast counter-attacks. And we have to admit that they are doing it very well. With four wins and one draw in the latest five home games, they are coming into this game with one thing on their mind, and that is a victory.

By the way most recent five matches of the Lions all ended with under 2.5 goals.

FULHAM LATEST NEWS
The Cottagers are simply amazing recently, and it is all because of a Serbian duo. Manager Slavisa Jokanovic, and the striker Aleksandar Mitrovic, who won the SkyBet player of the month award. Mitro, who came from Newcastle on loan, already reached double digits when it comes to scoring and is an enigma for the opponent’s defenses.

We have to mention also, that Fulham’s defeatless row extends now to 17 straight clashes. But the last game against Brentford was almost like a loss, as they conceded a late goal, which might damage their prospects for finishing second, and clinching a direct advance to the Premiership.

H2H – LATEST STATS
When it comes to head-to-head meetings, Fulham won the first leg minimally, 1-0, after Oliver Norwood calmly scored from the penalty kick in the injury time of the first 45 minutes.

Latest three games between the two local rivals were poor when it comes to scoring, and we saw only two goals in total.

MATCHUP TO WATCH
The key matchup in this event is going to be between Aleksandar Mitrovic and two center-backs of the hosts Cooper and Hutchinson. If they stop the robust striker, Millwall has high chances to stay unbeaten in this one.