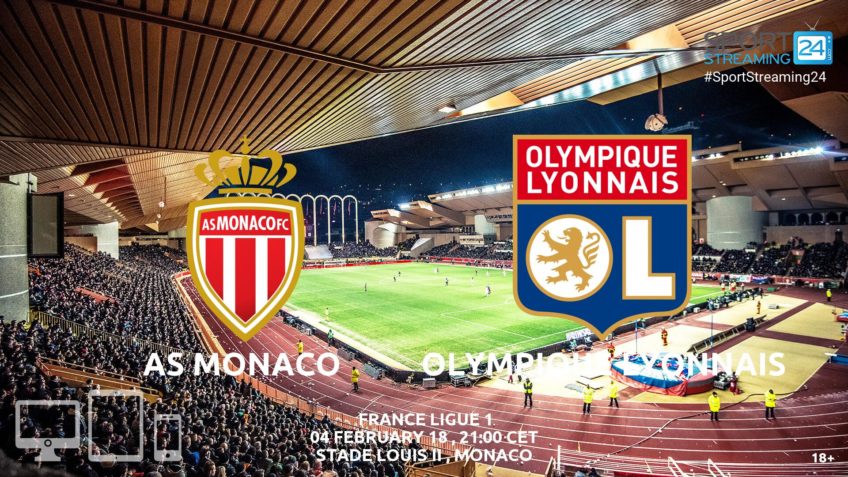 bet365 are showing Monaco v Lyon live streaming for Ligue 1 on February 4, 2018, through their live streaming service (available for mobile devices such as iPhone, iPad, Android)

It is looking like PSG’s season in Ligue 1 but the battle for second place is still well and truly on. Two of the sides fighting it out for the European positions meet on Sunday afternoon as Lyon travel to Monaco looking to stay as close to PSG as possible.

Monaco is struggling in 4th but they have a 10-point lead over 5th-placed Nantes so they should manage to hold onto the final Champions League place.

MONACO LATEST NEWS
Monaco is currently enjoying an eight-match unbeaten run, looking to make it nine against Lyon. While this seems like a very good run of results, they have drawn three of their last four in the league, including 2-2 against Marseille in their most recent match.

Monaco have had to deal with a lot of injuries and they will be hoping that Thomas Lemar returns to the side in this one, he is joined by seven others who are on the verge of coming back to full fitness.

LYON LATEST NEWS
Before the 3-1 defeat to Bordeaux in their last match, Lyon had been on a run of fixtures where they had won six out of eight in the league, this propelled them into 2nd and meant that they were PSG’s main challengers.

Watch Monaco v Lyon live streaming at bet365* (18+, T&C Apply)
(*watch and bet, geo-restrictions apply, funded account required or to have placed a bet in the last 24 hours to qualify)

They don’t have any real injury problems and with Mouctar Diakhaby, Mariano Diaz and Fernando Marcal returning to training this week, they will be more confident.

HEAD TO HEAD
Despite Monaco’s upturn in form over the last few seasons, they haven’t got a great record against Lyon. Sunday’s visitors have won four of the last five meetings between the sides in all competitions with one of them coming just over a week ago in the Coupe de France.

It was a five-goal thriller and saw Monaco knocked out of the cup at the last 16 stage.

MATCH EXPECTATIONS
This one certainly has all the makings of a great game but the quality of the game will rest on how badly each side wants to win it.

Lyon’s league position would make them favorites usually but Monaco has the benefit of their home fans and will want to leapfrog Lyon and Marseille to get into 2nd. This match has a draw written all over it but it could go either way, expect goals.