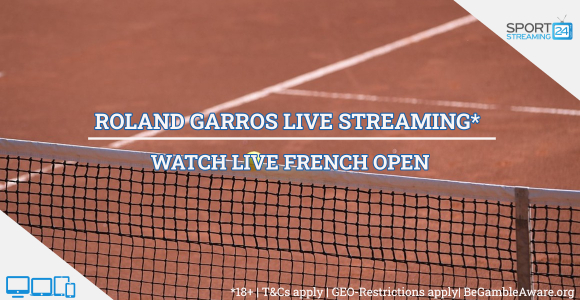 #ad *You must have a funded Sports account or have placed a bet within the last 24 hours in order to view bet365 streams | Geo-Restrictions apply | bet365 is not permitted to stream certain events to the host country. They use your IP address to present the events available to you. Excluded countries include Singapore, Germany, United Kingdom, Netherlands Antilles, Cuba, Iran, Korea, Democratic People's Republic of, Ontario (Canada), Syrian Arab Republic, Venezuela, Buenos Aires City and Buenos Aires Province

The French Open (Roland Garros) is the second Grand Slam tennis tournament in the season. It takes place in Paris, on clay courts. Watch live tennis streaming of Rafael Nadal, Novak Djokovic, Andy Murray and Stan Wawrinka fighting for the trophy in the men's tournament and Serena Williams, Simona Halep, Agnieszka Radwanska and Garbine Muguruza in the women's tournament. Can somebody surprise them and win the title on the Philippe Chatrier stadium?

Rafael Nadal is the absolute record holder with nine titles. From 2005 to 2014 he failed to win only one tournament, in 2009, which was won by Roger Federer. In Open Era, Bjorn Borg won six titles, while Mats Wilander, Ivan Lendl and Gustavo Kuerten won three titles each. Out of the active players Stan Wawrinka, Novak Djokovic and Roger Federer won one title each. However, both Novak Djokovic and Roger Federer are the biggest losers in this tournament in Open Era - they lost three and four finals in Paris respectively, mostly against Rafael Nadal. French Open

Chris Evert is the most successful women player on French Open, she won seven titles in Open Era. Behind her, there is Steffi Graf with six titles, Justine Henin with four titles and Aratxa Sanchez Vicario, Monica Seles and Serena Williams with three titles each. Among active players, Maria Sharapova, Francesca Schiavone, Svetlana Kuznetsova and Garbine Muguruza won one title each. Serena Williams will try to win her record breaking 24th Grand Slam title at Roland Garros 2017. She already broke Steffi Graf's record of 22 Grand Slams in the Open Era and now she wants to break Margaret Court's record, who won 23 Grand Slams both in Amateur Era and Open Era.

Of course, Rafael Nadal and Novak Djokovic among men and Serena Williams among women will be the biggest favourites to win this tournament. Watch the live stream and don't miss even a fraction of the action on the second Grand Slam of the season.